▲
PLEASE NOTE: Due to COVID-19, we are not shipping outside the UK/Ireland.
Our current leadtimes on handbuilt wheels is 4 weeks and the leadtimes on custom bike builds is 6 weeks.
Products » Books » Books » MATT LAMY Rides of Passage 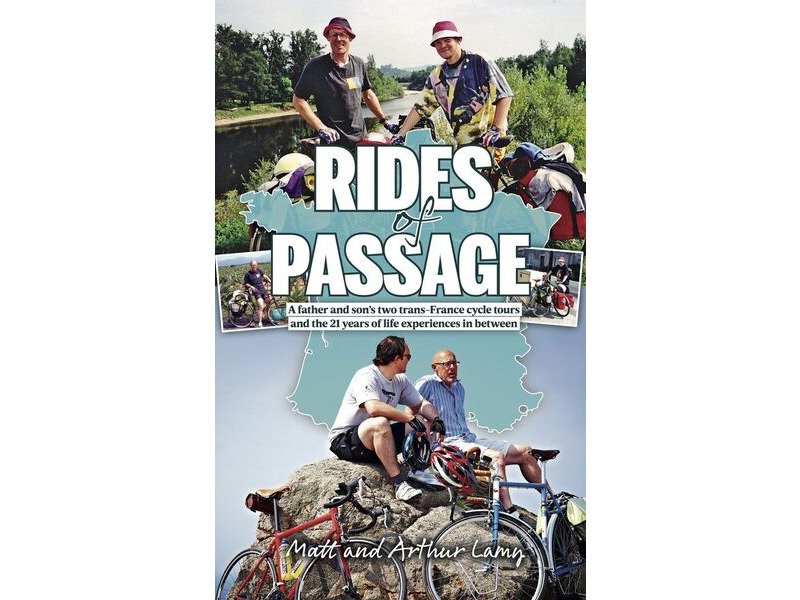 In 1994, aged 42 and 15, father and son Arthur and Matt Lamy cycled across France from the Channel to the Mediterranean. Twenty-one years later, aged 63 and 36, they decided to do it again. Rides of Passage is a touching, hilarious and irreverent account of both those adventures as our intrepid duo try to overcome French eccentricities, testing weather and terrain, and their own incompetencies and neuroses. But much more than just a travel or cycling book, Rides of Passage is also a testament to the life of the British family man, as Arthur and Matt wax lyrical about the subjects that effect many of us: getting older, going to work, love, marriage, children and the changing relationship between a father and son.

"Heartwarming, funny and insightful it made me wish I had done something similar with my own dad." The Northern Echo

"Rides of Passage is touching in its treatment of the passage of time and a special father-son bond, as well as in its delicious descriptions of France as seen from the saddle." French Property News

"The appeal of this entertaining book is broad: anyone who has a father or son, anyone who has ever undertaken a long-distance trip, or anyone who has an interest in riding in France will enjoy many aspects of it â€” 10/10." Cycling Weekly

"Rides of Passage is a romp of a ride and a read." Cycle â€” Cycling UK / CTC magazine
MATT LAMY

OUR PRICE £12.99
As with any product, specification is subject to change without prior notification. You are advised to confirm current specification before buying.
We have placed cookies on your browsing device to enable this website to function correctly.
Further usage of this website indicates you are happy for us to do this..
Find out about the cookies we have set and how we use them.